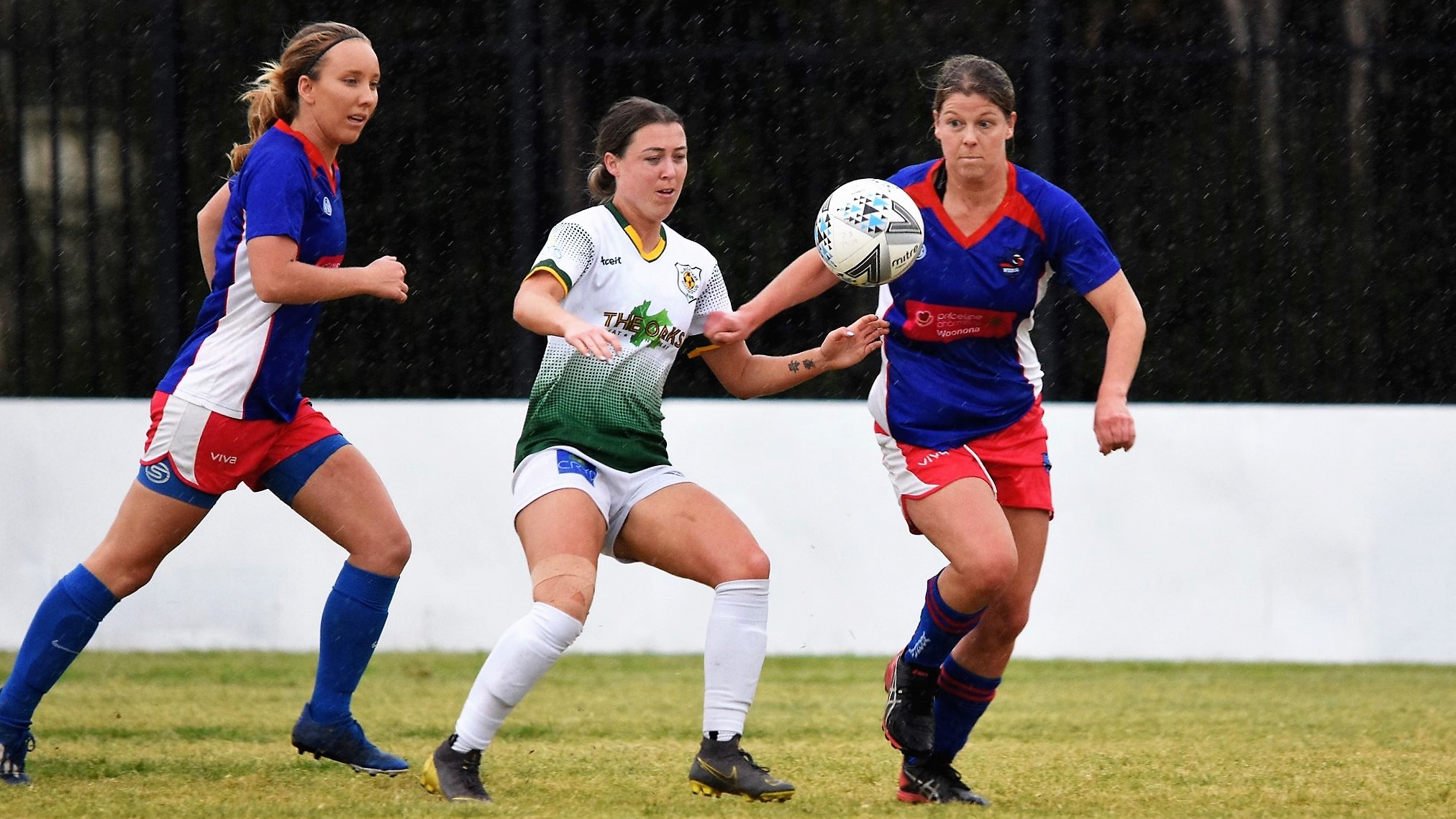 Women’s league champions Albion Park proved too strong for a stingy Woonona side at Terry Reserve on Sunday afternoon, downing the Sharks 2-0 thanks to a Brittany Ring brace.

Albion Park were looking to avenge their loss to Woonona earlier in the season and they almost got off to the perfect start when Brittany Ring’s shot on the turn was saved by Samantha Clark in the fifth minute.

The home side then should have taken the lead when Renee Crowe was found wide open at the back post following a corner. However, a slight touch on the way down to the winger, saw it rebound just beyond the post with a goal gone begging.

Albion Park continued to fire out of the blocks and again had another chance to nab the lead in the 10th minute but a chipped effort from Ring rebounded off the crossbar and Woonona were able to clear.

The very one-sided contest continued later in the half as the ball found Crowe unmarked at the back post yet again and it was the same outcome for the home fans as the ball deflected off her leg to a Woonona defender.

Woonona slowly started to claw their way back into the game and had their first sight on goal in the 36th minute. Jordan Wheatley attempted the spectacular scissor kick off a corner that she almost pulled off too, only for it to be touched onto the crossbar by a diving Aleisha Chessell in the Park goal.

The second stanza was similar to the first, with Albion Park denying Woonona to any chances on goal as they hunted their first of the day.

In the 50th minute, it was Ring leading the attack yet again for the home-side and her cross from the right picked out Sophie Zirogiannis. Her first time attempt powered goal-wards but a strong hand from Clark palmed it out for a corner.

Despite going so close through Zirogiannis, Albion Park took the lead three minutes later. From the exact same play as the first half, Chessell’s goal-kick bounced over the Woonona defensive line for Ring to run onto goal. A slight hesitation by Clark was punished by Ring, who dinked it over the goalkeeper and into the net, opening the scoring.

A see-saw next 20 minutes limited chances on goal for both sides. But it was Ring grabbing her second of the day in the 76th minute to all but confirm the three points for her side. A nice switch of play by Eliza Cowan found Ring on the right, isolating her with her opposing number. Too much speed and composure saw Ring slot it into the far bottom left corner as she grabbed her ninth of the campaign.

There was one last-ditched effort from the visitors in the 87th minute when Tasha Guss dispossessed the Park defence and surged towards goal. However her shot aiming towards the near post bundled the side netting.

Albion Park ending as 2-0 winners as they stay in the hunt for the league championship in 2020.

The win sees them sit three points ahead of second place University who are still to play Fernhill on Wednesday night. They travel to Macedonia Park on Sunday to face Wollongong United.

As for Woonona, the loss sees them slip five points behind the league leaders and one-point above fourth placed Thirroul. The Sharks return to Ocean Park to take on the Thunderbirds next weekend.